Grandmother Bernice loaned us her place at Otter Crest Resort in Oregon.  Remember, you’ve been there too?  Did you see otters then?  I’ve been walking with Nona and Papa up and down Otter Creek Beach, but we haven’t seen otters.  They otter be here, right?  (That’s a joke.  Papa says it’s called a “play on words” or a “pun.” Nona says, it’s a “pun-ishment,” and I should stop encouraging Papa.) 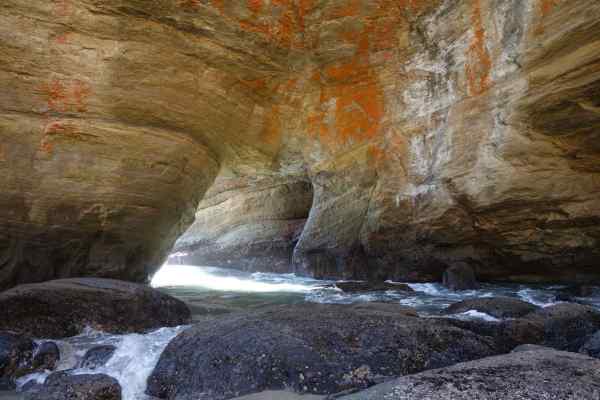 Bowl? Looks to me like a huge hole surrounded by rock. Punch? Just sea water rushing in and out. No way would I drink it!

Another thing, we went to Devil’s Punch Bowl, and, guess what?  No devil. no bowl, and no punch.  Maybe these places will go onto my list of names that don’t make sense.  What’s with whoever names these places?

Hey, I’m not complaining, though.  Otter Crest Resort is a wonderful place to stop for a rest.  Everyday, somebody leaves something new that they built on the beach, and every day the ocean comes up and washes it away.  Nobody complains.  They just start making another sand castle or sand sculpture. 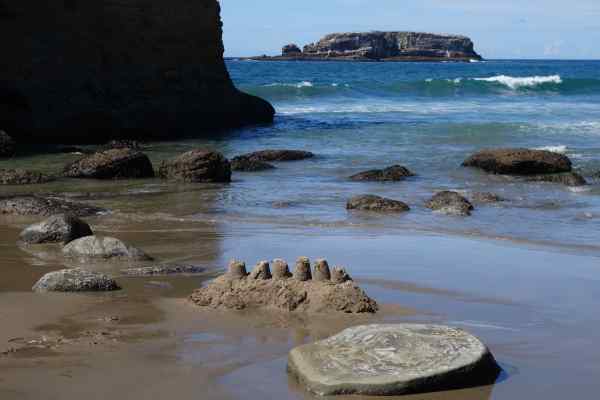 I enjoyed watching the waves lap at this sand castle and slowly destroy it.  Is that bad of me?

They put all that work into making a sand castle, knowing that, when high tide comes, swish, swosh, slosh the ocean is going to destroy it.  Hey, here’s something we saw on the beach that the ocean won’t destroy.  Papa called it a fossil. 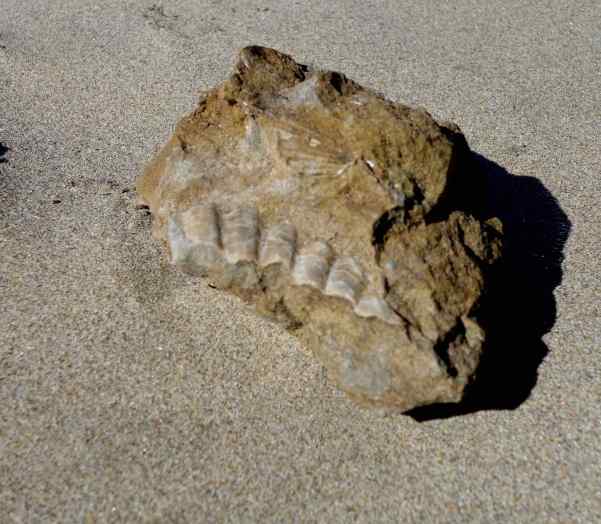 A nice couple, the age of Nona and Papa (we’re talking old), showed us where on the beach to find rocks with fossils.

Papa is confusing me, though.  I had thought that really old people with stodgy ideas were fossils.  Well, because that’s what Papa calls them, “Why you old fossil, you” or “What an old fossil that guy is” or “When’s that old fossil coming into the 21st century anyway.”

Oh, but I’m getting off track.  I’m supposed to be telling you about our time here at Otter Crest Resort. (And, THANK YOU, Grandmother Bernice!) I took this rather artsie portrait of Nona and Papa on the Otter Creek Beach one afternoon. 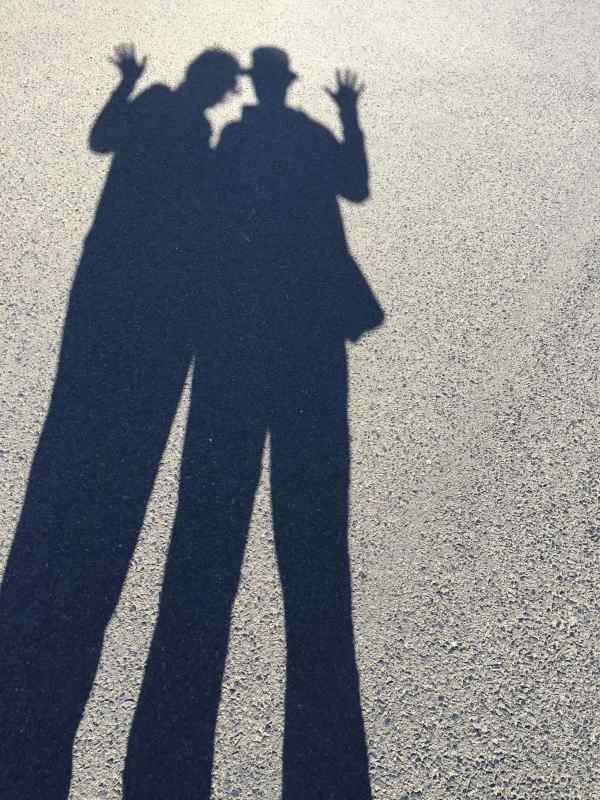 Nona and Papa aren’t really that tall,  you know, the angle of the shadow makes them look tall. Neat, huh?

Nona had to help me hold the camera because it’s so big and heavy for me, but the perspective was all mine. Next time, I think I’ll have some photos of a place we’re going to visit one afternoon. It’s called Newport.  I wonder if it will be new or even a port?  The way things are named around here, you never know until you check it out.  Bye for now.

*New reader? Get oriented below.