Oh, girl, did I have a scare today!  You remember that before Papa retired, he was what he called a “non-profit, public interest lobbyist” in Washington.  That’s a mouthful, isn’t it?  Over the past 3 years, I’ve figured out what that means, I think.  He tried to influence what the government does.  BORING! So, this morning when Papa said, “Hey, let’s take a walk over to Government House,” I thought maybe he was taking us to work here in Victoria.

“Papa, let’s not do that, OK?” I pleaded with him.  Something was a bit off though.  He didn’t have on his dress shirt and bow tie. He always wore those to work.  So, I asked him, “If you’re going to Government House, why are you wearing your raggedy hiking outfit?  And, by the way, Papa, I’m not putting on a bow tie for you. Please let’s not go to work.”

Here’s Papa walking in the garden at Government House and not trying to influence government.

We saw some things that interested me outside Government House. For instance, I’d like to learn to paint pictures.  Then I would make a picture of these leaves. 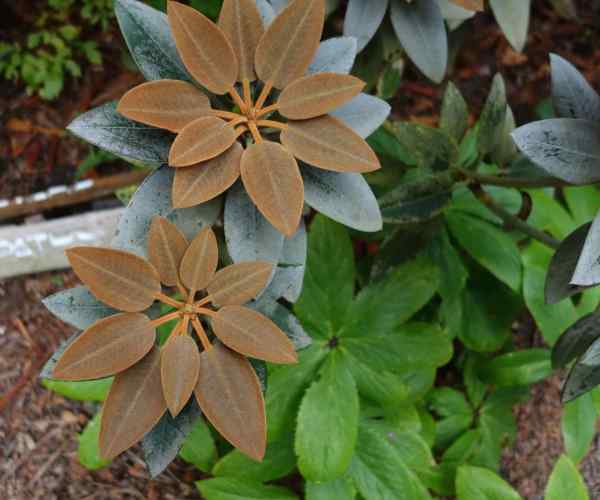 You wouldn’t think plain old leaves would interest an iguanodon like me. Back in Jurassic times, I would have just chomped these down for a snack.

As a modern Jurassic, I’m finding my “inner artist.”  I look at these leaves and my first thought isn’t “I wonder how these would taste?”  Nona has helped me to develop an appetite for beauty.  Now I look at these and ask myself, how could I compose a painting that would convey how these leaves make me feel when I see them.  My Jurassic ancestors must be rolling over in their fossil beds to hear me say that.

When we saw these flowers, I got a little sad, because they looked to me like maybe they were at the end of their too short lives.

Still pretty yellow and with a pleasing repeating pattern, these flowers looked to me like they are beginning to droop.  I guess they made me feel droopy, too.

Nona said, “Solbit,I think you feel droopy when you look at those pretty flowers because you feel for them.  Do you know that you are experiencing something called empathy?”  I asked, “Is that bad, Nona?”  She told me that empathy is a good thing to experience, “because it means you can feel what someone else or another thing is feeling.”

We had not yet caught up with Papa. (He was wondering into the garden solo.  I think he likes doing that.) We came to these red flowers.  I looked at them and perked up.  Something about that color made me feel happier.

Nona asked me to remember that, in Chinatown,  I learned that red was considered a lucky color. I’m thinking of these flowers as my good luck blossoms.

Well, I hope you’re having as good a summer as I am here in Victoria, but the news of forest fires, smoke, and mudslides there in California doesn’t sound good. Please write soon and tell me you’re safe and enjoying the summer flowers, too.

*New reader? Get oriented below.